Every once in a while I get to reading books on food for health. I am looking for that magic dietary change that will cure what ails me. And I don’t want to give up too much. I enjoy food. I enjoy baking. I enjoy my glass of wine and a cocktail or two at times. I enjoy bread and cakes and pies and cookies. Like I said I’m looking for magic! I got my hands on an anti-inflammatory diet crock-pot cookbook. There are some really good sounding recipes in here. I’ve already made the Spanish Rice and am now trying a soup recipe. I am calling it a stew so Hubby will like it, and adding some meat.

This is my variation of the White Bean & French Onion Soup from The Anti-Inflammatory Diet Slow Cooker Cookbook by Madeline Given (the italicized ingredients are my own addition or changes).

Put the sliced onions, olive oil and salt in the crock-pot and cook on High for 3 hours.

This makes the kitchen smell good as it cooks. For “stew-like” bowls ladle the soup with a slotted spoon into your bowls. I served this with a toasted baguette. Hubby liked it. 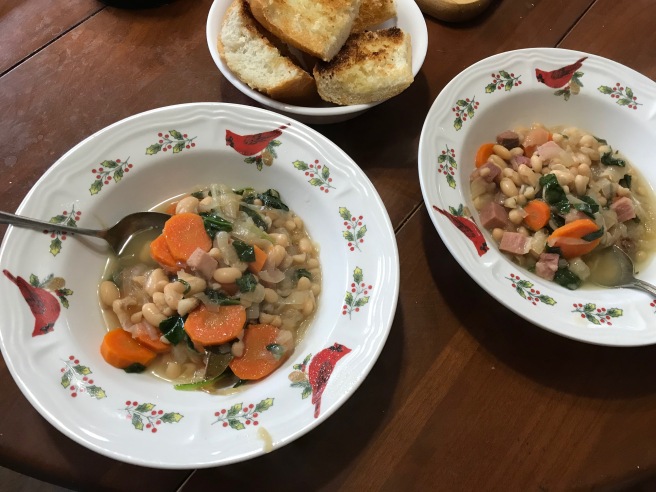 The first answer that comes to mind is “nothing much”. But there is a new green bucket for compost. I have subscribed to a composting service called blue earth. This is not a paid endorsement just my newest little way of saving the planet. And we earn dirt! I would post a picture but it just looks like food scraps.

Next, I found Keurig cups that are completely compostible: Chock Full O’ Nuts. Oh, and the Keurig is also new in my kitchen. Hubby and I were drinking less coffee even though brewing a pot full each morning. This way we control the amount of coffee used and drunk.

I have not been doing much baking or innovative cooking. My creative juices seem to have dried up. Cooking dinners of meat and vegetable and sometimes rice or potatoes. No recipes required. I see recipes that I think are interesting but have not gotten around to it. 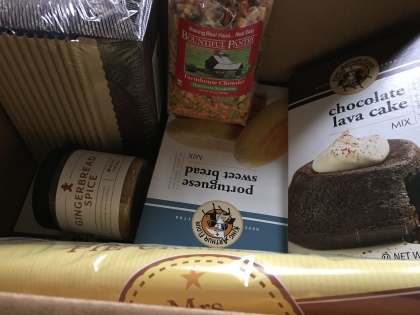 So tonight’s dinner is soup and bread. The soup is a mix from King Arthur Flour. In fact I got my purchases in the mail today. Contrary to my nature, I ordered several mixes from them. I do not usually buy mixes or from on-line but took a survey and got a coupon. My math skills being a little rusty had the idea that 10% would be $10 but is really only $5 on $50 worth of items. Oh well.

Soup is for supper even though I had thought about barbecue chicken pizza. On Facebook I saw a video on how to make a stuffed crust pizza in a cast iron skillet. I love my cast iron skillet and I have four pieces of barbecue chicken hanging about in my refrigerator. There’s also three pieces of Popeye’s chicken in there.  But there is a nice loaf of artisan bakery bread that needs to be eaten. The soup is farmhouse vegetable and I used chicken stock. Hubby will eat a couple pieces of chicken anyway. And this dreary New England day is a perfect one for soup. I will need to steer Hubby away from the BBQ chicken so I can make that pizza tomorrow night, or Saturday, or maybe someday in the future!

So here is my three ingredient supper! 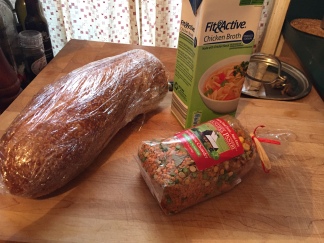 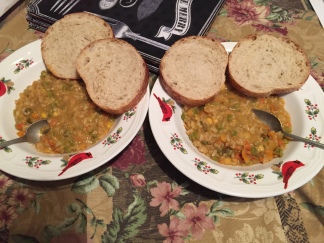 I have been browsing through food magazines while walking the treadmill. The problem with this is that I get too many ideas and want to make them all at the same time. Last week I found an article in Rachel Ray’s magazine on One Grocery Bag: 3 Great Meals. This was from March of last year. One of the menus was lentil soup with pita and whipped feta. Sounded interesting. I have a bag of lentils in the pantry and feta in the fridge. So what’s the problem?

Before I get to make that meal, I am browsing through one of her magazines from 2014 and find other interesting recipes that I want to make and have the ingredients (or most of them). One of them is a pasta with chimichurri and tomatoes. This is fabulous because in my “Want to Try” recipe clippings I have a chimichurri recipe that I was trying to figure out what it should go with. Pasta!

But one thing at a time!

For Monday night’s meal I go with the lentil soup. I have leftover chicken so this will not be a Meatless Monday. I use the recipe as a guideline only. I use chicken broth and add potatoes and celery. I want to make a lentil stew as Hubby likes stews better than soups.

Chop the vegetables. Heat 2 tablespoons olive oil in large pot. Throw all the chopped vegetables, including garlic, into this pot and cook for about 5 minutes. Add the rinsed lentils and chicken broth along with the cumin. Add the chicken and bring to a boil. 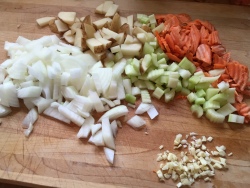 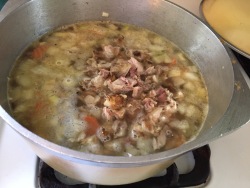 Cover the pot and let simmer for 30 minutes until the lentils are tender. This could take a bit longer, up to 40 minutes.

Now for the whipped feta. I used my immersion blender instead of a food processor because I only had 1/2 cup of cheese. I put this in a glass measuring cup and added 1-2 tablespoons olive oil. Blend/whip/process until smooth and fluffy. Mine was more smooth and creamy than fluffy. I added about 1/4 teaspoon dried oregano as well and drizzled a bit of lime infused olive oil on top. I added some parsley for presentation. 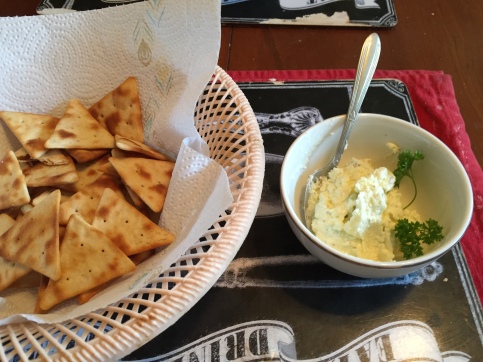 I served this with Keebler Townhouse Pita Crackers instead of the toasted Pita bread wedges suggested in the magazine. The soup and this made a nice supper. The dip was “grown up” per Hubby and is definitely worth making again. I think I would add a sprinkle of red pepper flakes to the soup next time. I forgot to add chopped parsley to the soup for the picture. When I added it to my soup it gave it a nice fresh flavor addition. This is parsley growing out on my porch. Much nicer than the dried stuff!

In trying to think of what to write about to share with you all Hubby suggested comfort foods. I cannot truly recall what these were in my childhood but in hindsight I think about Chicken Dumplings and Potato Soup. Hubby thinks about grilled cheese sandwiches cut into “soldiers” and served with tomato soup. Grilled cheese and tomato soup is a combination my sister served her children. I did not like tomato soup as a child so I never made it or served it to my children. Mind you, this would be the condensed version diluted with water; I don’t think my Mom used milk to “heat and serve”. Nowadays there are the non-condensed soups with added tasty ingredients and I find that I enjoy tomato soup with spinach every once and awhile. I read somewhere a long time ago that foods served with a spoon are comfort foods, perhaps adding cream or milk as well. Sounds reminiscent of children’s foods.

I have a bunch of potatoes recently bought and in the bottom of my pantry. I have a hankering for potato soup. My Mom’s potato soup was made with milk, potatoes, onions, and butter. I remember the butter floating on top. She would not have necessarily used evaporated milk or cream so it was probably plain milk and water. It was a thin soup with the potatoes being the primary solids. 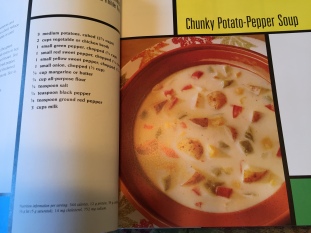 I have a potato soup in a cookbook that I bought as an adult. It is one of those Better Homes and Gardens collections. The pictures in this book are very appealing. Here is the one for potato soup. It looks wonderful. Makes me hungry just looking at it! I think I may have made this once before but it doesn’t seem to me that my children ate it so I am not sure. Hubby doesn’t particularly like soups unless they are very chunky and stew-like. That may be a difficult call for a potato soup. But since I am home days with this tiresome broken ankle, I could make soup for my lunches. That is the plan!

This particular soup calls for chicken or vegetable broth. Well, I believe I have some frozen homemade turkey broth in the basement freezer. But I do not go down the basement steps on crutches. No, no, no, no! So I look into my newer The Settlement Cook Book (newly revised and enlarged, 1965, 1976, original publication 1901). Other than caraway seed which I entirely doubt that my mother used here is a recipe that sounds like hers: potatoes, butter, salt and pepper, onion, and milk. 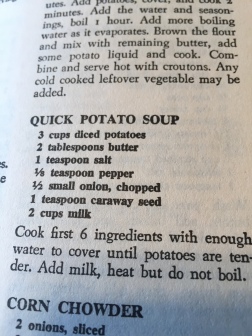 Now I never leave well enough alone so I want to add colorful red peppers, maybe some orange and yellow as well, and bacon or ham. I might even add the tops of green onions. 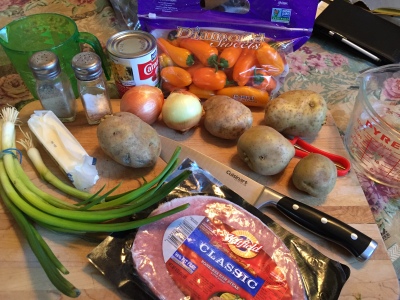 So I gather my ingredients: I am using canned milk for a creamier base and could add regular milk to make two cups. Or I could just add the can, undiluted, to the liquid after it cooks. This will depend on how much liquid is in the pot when the time comes. The recipe calls for 3 cups diced potatoes. The other calls for 3 medium potatoes (2 ¼ cups) so I will use 4-5 potatoes. I like onion so I will use two small onions instead of ½ of a small onion. I have also learned that to sauté the aromatics prior to putting them in the soup liquid make a more flavorful soup. Therefore I cut the onion, peppers, ham, and cook those gently in the 2 Tablespoons of butter. I cook these for about 5-7 minutes until there is quite an onion aroma in my kitchen! 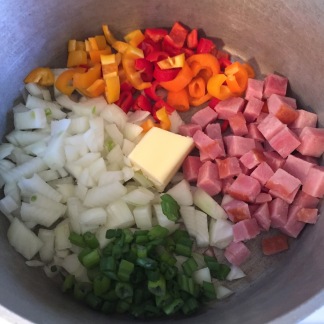 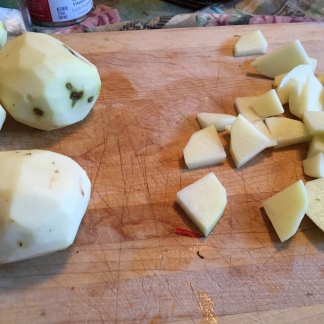 Meanwhile peel and dice the potatoes. I peel 5 potatoes which makes 4 ½ cups. I suppose I could have done with 4 potatoes! Oh well! While I am dicing these it occurs to me that my Mom sliced her potatoes so I do that, sort of. These are about 1/8-1/4 inch thick. I wonder why I peel these. Most of my potato dishes have the peels intact. In fact, a second look at the Better Homes and Gardens photo shows unpeeled potatoes. Too late now. Add these potatoes to the pot with the aromatics and add water to cover. 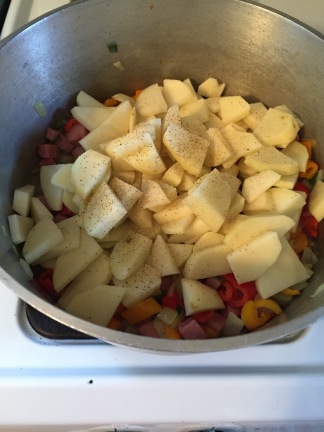 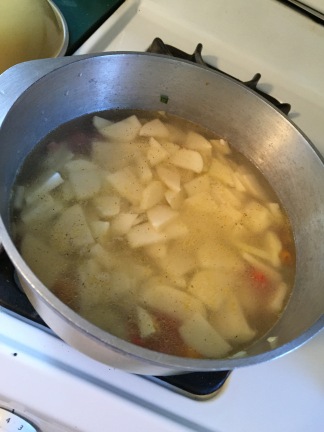 This amount of ingredients took almost 5 cups of water. Now this is to be cooked until the potatoes are tender, 10-20 minutes. The milk will be added then and heated through but not brought to a boil.

I found a package of not too stale saltines which is what my Mom would have served this with or with white bread toast. I prefer the saltines.

The ingredients for this soup turned out to be:

One could add a can of clams, drained, and turn this into New England Clam Chowder. Or add fresh or canned or frozen corn and turn it into Corn Chowder. One could put a bunch of vegetables in there and have a creamy vegetable soup. I bet broccoli and carrots would be nice and one could stir in some grated cheese. This could quickly be prepared with pre-prepped ingredients found in the freezer and produce sections of general grocery stores. All kinds of possibilities when talking about soup!

And soup is so nice to have on cold, bleak winter days;my thermometer says it is 21 degrees (F) outside today!