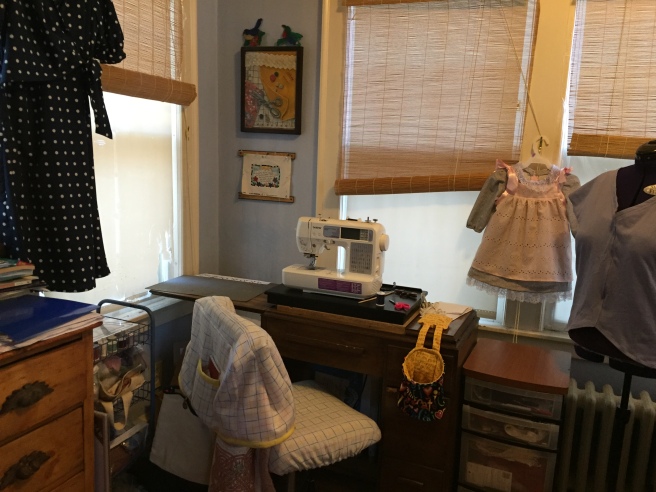 My sewing room has been feeling neglected so I spent time in there instead of browsing recipe books. But dinner is needed and I was thinking of something simple like bacon and eggs when I took a break and looked through my “recipes of interest” notebook. And there I found a recipe for a quinoa and green bean salad. In fact I found two variations. I say to myself “Self, there are green beans in need of fixing! And there is quinoa in the pantry.” Although salads can be nice for lunch and can work for suppers, I think hubby would like more substance. How about adding the bacon and eggs? And serving it warm? 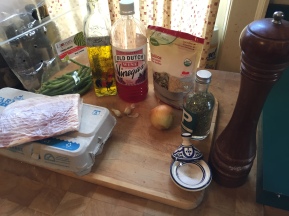 I put together what I want to use. Servings for two. (You can double the quinoa and the beans if you want to serve four.) 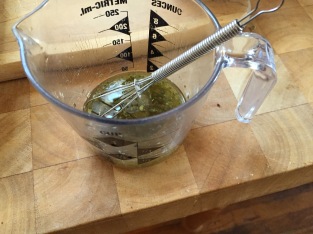 First make the dressing: whisk together the vinegar, 1/4 cup olive oil, and parsley.

Put a bit of olive oil in a skillet to saute the garlic and onion. I then added the diced up bacon. Oh boy does this make the kitchen smell good! When the bacon is cooked I added the quinoa and stirred it for one minute. I am adding the amount of water per the quinoa package directions, so this is 1 cup. This is then brought to a boil, the skillet is covered, the heat lowered and let simmer for 15 minutes or per the quinoa package directions. 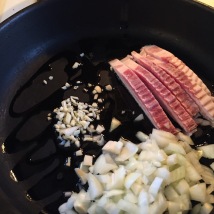 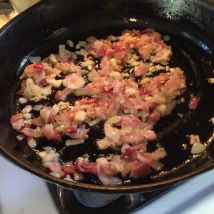 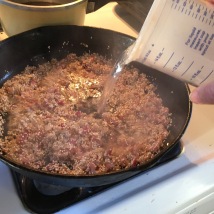 Meanwhile blanch the green beans just for a few minutes until bright green. (Do these look brighter green?) They should be al dente. 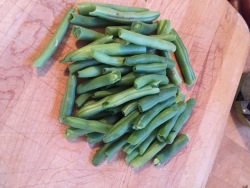 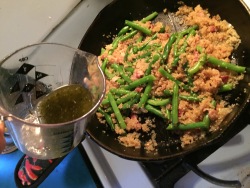 After the quinoa has been cooked per package instructions and let sit for 5-10 minutes to finish absorbing the liquid, stir in the green beans and the dressing. Keep this warm.

Now to poach the eggs. I have not really studied how best to do poached eggs. I think I read somewhere to put a little vinegar in the water but I am not sure. I bring about a half inch of water to a boil in a skillet. Then I slowly pour each egg into the water. I cover the pan and wait for the whites to solidify. How did I do? 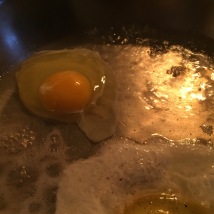 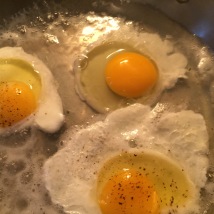 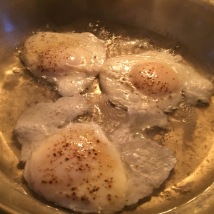 Scoop the quinoa mixture into serving bowls and carefully place an egg or two on top. 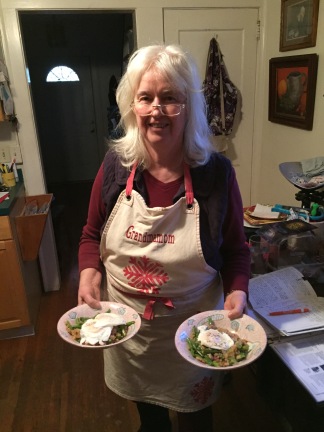 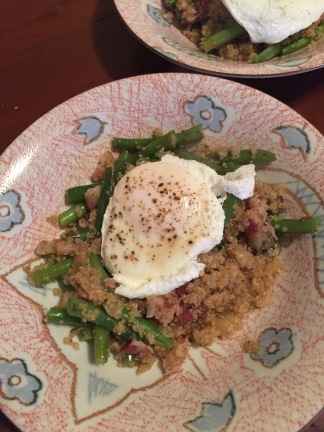 Quinoa is one of those super foods that is being touted as something we all should eat. It provides protein. fiber, and essential vitamins and other nutrients. I have some other recipes I plan to try out in hopes to put this in our diet. Stay tuned. 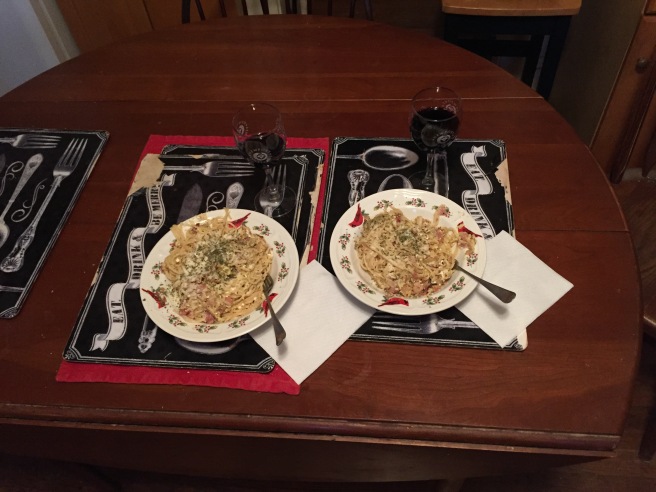 Sometimes it is difficult to know what to cook for dinner. I am trying to cook what is in the house to avoid a grocery shopping trip until another week goes by. I like having food in the house so when I go to the store I tend to buy lots! Everyone chooses how to spend their money; some spend it on dining out, entertainment, cars, travel. Me, I tend to spend it on food! And of course reading my fellow bloggers recipes and seeing the photographs of delicious food always inspires me to have enough variety of food in the house so I can cook up an experimental dish on a whim!

The inspiration for this dish is threefold. First and foremost is this blog that I just recently was reading: https://mioshotfood.wordpress.com/2015/12/10/original-italian-carbonara/. This sounded fabulous and I wanted to make this. While thinking about this I remember my brother-in-law talking about making a bacon and egg spaghetti and also in one of the many food magazines I have read over the years there was a page on a quick weeknight dinner featuring a bacon and egg spaghetti. I describe this to hubby and he says it sounds appealing so up from the sofa we get and go into the kitchen.

Here’s what I used:

Boil the water for the spaghetti. This is what takes the longest time for this dish. While waiting for the water to boil and/or the spaghetti to cook, dice up the bacon, onion, and garlic. Hubby kindly took care of the bacon while I did the other. Saute these together in the skillet with a little bit of oil. Add the oregano and basil when the bacon is starting to brown and the onion is caramelizing. I read somewhere that fat distributes the flavors so I am thinking this is the time to add the seasonings. This concoction will have your kitchen smelling wonderful! 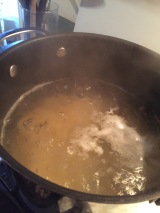 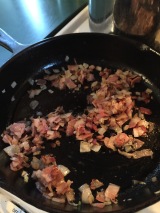 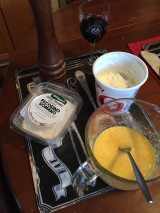 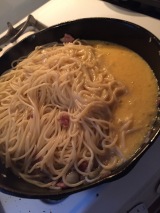 In a bowl beat the three eggs with a fork and add the Romano cheese. Drain the spaghetti and add it to the skillet with the bacon and onion. Pour on the egg mixture. Cook this over medium heat stirring with tongs to coat the spaghetti. It will start to look like scrambled egg on the spaghetti. We added the cottage cheese here for extra creaminess. Season with pepper. Put in serving bowls and sprinkle with the dried parsley and more pepper to taste. 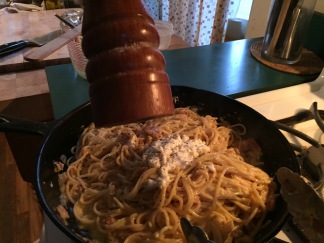 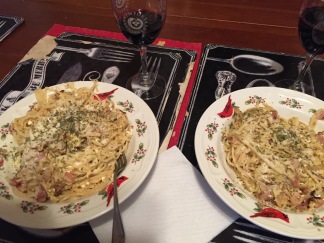 It served the two of us. This would be nice served with a green salad and crusty bread neither of which I had in the house at the time. I figure the onion is our vegetable, the eggs and bacon are our protein, the cheese is the dairy, and the pasta is the grain. That covers the major food groups and makes this a square meal!

I was looking for my recipe clipping for the very first biscuits and pancakes I made on my own. It is a small piece of brown paper cut from a Commodities flour bag. . Commodities were part of the USDA program to provide supplemental food to the elderly and  poor among others. 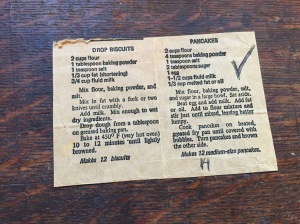 My grandmother was an elderly widow on a fixed income in the sixties. She would come and stay at our house for the summer or for several months. Along with her would come her USDA commodity food products. There would be flour, sugar, peanuts, peanut butter, powdered milk, and more. Lard was the fat to cook with back then, soon to be surpassed by Crisco and its ilk. What I remember about Grandma are the butterscotch hard candies she would pack in her suitcase, which I looked forward to getting slipped as a treat. I think I would just stare at the candies longingly being too shy and not wanting to ask for them directly. That was me even in my own family. Waiting on the edges to be acknowledged and provided for. I had a very loving family but I internalized a sense of modesty to the extent of waiting, not making demands, and never putting myself in the center of attention. (For those of you who know me I have changed, quite a bit, and am not the shy retiring girl I used to be.) But back to Grandma…

Grandma would cook with lard. There was no shame in frying up chicken or anything else for that matter and mashed potatoes were smothered with butter, or oleomargarine. She made the best biscuits ever. I have no idea what recipe she used; I’ll have to ask my sister. She has more knowledge about our family food history than I do. These biscuits were melt-in your-mouth tasty. Eggs would be fried and grease poured over them in the cooking. Grandma and my mom had a bit of weight on them. As they grew older and frailer in health they became thinner but one could always see the remnants of the belly and the round face. I have to watch out for this. I look in the mirror and sometimes see my mother’s face looking back at me. The belly is creeping up on me now too.

Lard is making a comeback into the kitchens of America. It is hog fat. It is processed to a degree but does not have to have trans fats. At least the pound I bought recently has 0% trans fats. It is not pure unprocessed “real” food because it has to be preserved in some way. The additives stabilize taste and texture. Shortening has always made a flakier pastry than butter but shortenings are out of favor. Butter seems to have gone out of favor too but hopefully is making a comeback. There are books that tout the healthier nature of butter to the “butter-like substances” filling the dairy shelves, and there are those who claim lard is healthier than butter. The idea came to me to make pie dough and to use lard. Actually I was watching a TV show on pies across America and one bakery featured used a combination of lard and butter and I liked that idea very much and wanted to try it. So I find a pound of lard for about the same cost as the pound of butter and bring it home. And what about biscuits? Perhaps Grandma’s were made with lard. Hmmmmmm? 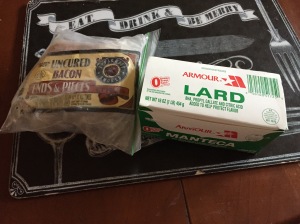 Which brings us to the other hog fat that is tasty, tasty, tasty, and which fragrance makes one’s mouth water: Bacon. And not just any bacon. Uncured bacon. Uncured bacon is processed in some fashion but not with the chemical additives so it is safer to eat. On my recent foray into the world of Trader Joe’s my husband and I looked hard and long at the meat. The price of uncured bacon is out of our normal budget but there was this package of ends and pieces. Hey, what the hey. I usually have found myself hacking off an inch or two from the bacon package to flavor dishes and not frying up slices. So this will be fine; I can hack off a chunk to use. I bring the entire frozen package camping. I can hack off a chunk and we can put it with our eggs in the morning. Labor Day weekend we are camping at our new found local private campground and cooking up our eggs in the cast iron skillet on the Coleman road trip grill. This is my husband’s fabulous new toy since the camping grill and the camp-stove blew up earlier this season! 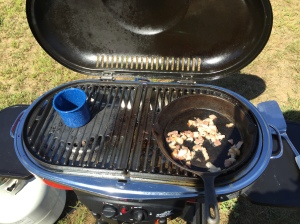 The taste of this uncured bacon was heavenly. Umami: a pleasant savory taste. It fills the mouth. There is a lot of bacon grease that we poured into a tin camping cup and kept. Women used to keep the grease can on the back of the stove to reuse. And then I think: I have two small potatoes that I brought for hash browns and an onion. How about we cook these in the bacon grease? And we do.

I cut up two small potatoes into matchsticks. I dice one onion. We fry this up in the cast iron skillet, stirring, and then letting them get nice and crispy. Yum, yum! 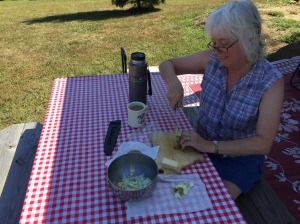 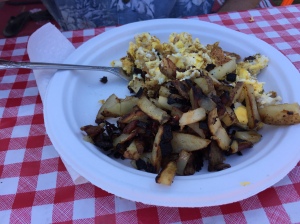 Now there’s a camp breakfast! Granted one cannot cook in fat all the time but every once in awhile, will it hurt?