Lima beans and corn. My Mom was a good baker. She could make candy, cookies, cakes and pies, even biscuits! Dinner food, not so much. She burned canned green beans once. She made regular food in her regular kitchen. I think she enjoyed the advent of convenience foods. She gardened but also bought lots of canned vegetables. She used to can her own vegetables. And she made pickles and jelly. I did not learn how to make pickles and jelly nor to can. Even now the canning process seems overwhelming to me. Then came the chest freezer. This was put in the basement with an adapter for the plug to a non-grounded outlet! This was just the way things were done: (Think about the overplugged electrical outlet featured in the movie A Christmas Story from 1983). With the freezer Mom could now “preserve” fruits and vegetables much more conveniently. She even got recipes for Freezer Jelly. A fond memory I have is that she used to put chocolate chips in a mayonnaise jar in the freezer to keep longer and/or to keep away from us kids. We kids, well me, would sneak handfuls of chocolate. When finally we confessed this Mom confessed that she thought it had something to do with the deep freeze. This new technology of home food storage was new to her!

For dinner she would always serve a vegetable or two. These would either be from the farm stand, her garden, out of the freezer, or from cans in the pantry. For succotash she would open a can of corn and a can of lima beans, pour them in a pot, and heat them.

I have always thought of succotash as a southern dish. I grew up in Missouri and my Dad’s family is from Arkansas/Oklahoma. So when I opened up my  Better Homes and Gardens Heritage of America Cookbook, I was surprised to find it in the New England section, from Maine! Then I looked up succotash on the internet and this makes sense, https://en.wikipedia.org/wiki/Succotash, since the word is Narragansett in origin. The dish apparently became popular during the Great Depression here in the United States and that was the era of my Mom’s growing up years. Some recipes call for creaming the dish with butter and milk. I don’t remember ever having it that way.

A few years ago I decided to resurrect succotash and serve it to my family. My hubby taught me that any frozen vegetable tastes better dry roasted in a skillet with a bit of sautéed onion. I figured this would make succotash taste better too. And it did. I have since begun adding a bit of fried bacon and a few red pepper flakes. And this is what I made for a side dish for dinner after the Christmas holiday. 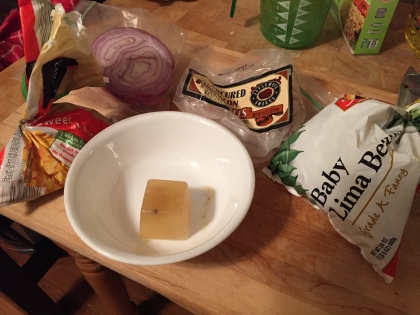 The amount of corn and lima beans is subjective. Use whatever is on hand or what seems like the amount to feed whomever you are feeding at the meal. I usually use a half bag of corn and 1/4 bag of lima beans. This time I had more beans than corn and it worked out just fine. A few strips of bacon and half an onion, even a quarter onion, should be adequate. I used about 1/4 cup of the bits and ends of the uncured bacon I store in my freezer. (It is almost time to traipse up to Trader Joe’s to get some more.) Oh and then there is the cube of frozen broth. This particular cube is 1/4 cup of chicken broth. You can just add a bit of water if you don’t have broth.

First fry up the bacon until brown and then add the onion for a few minutes. Sprinkle on a few red pepper flakes. Then add the rest of the ingredients.

The water in the frozen vegetables and the broth will steam the beans so they become tender. Mix that around in the pan and then cover with a lid and let steam on low-medium heat for about 8-10 minutes. Stir this occasionally and add a bit more liquid as needed. When done it will be moist but not have much liquid remaining in the pan.

This made a nice side dish for three to four people.