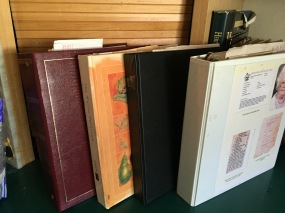 I spent a morning organizing my recipe notebooks in which I had collected clippings and printings of recipes I have used and/or want to try. It was quite interesting going through the most recent collection. I removed some that were duplicative and that I would not really use again. I have another one that also has “classic” recipes from my early days as a wife and mother. I did not glean through that one. When these are changed up it is kind of like losing the ambiance of the thing. I have three of my mother’s notebooks. I wonder if my daughter will do this? I gave her one to start on but…? 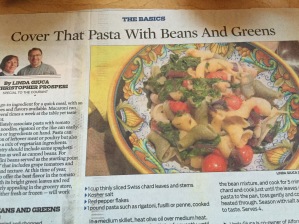 In organizing the two notebooks I came across this newspaper clipping from a year or so ago. In deciding what to cook for supper I wanted to use Italian sausages and thought this recipe could be the inspiration for supper. We like pasta dishes that have more “stuff” than the pasta.

I gathered what I wanted to use. I did not have fresh greens (Swiss chard) nor cannelini beans but that never stops me from going forward!

First put on a big pot of water to boil for the pasta. Cook pasta according to package.

I sliced up the sausage links. This is easier to do when the meat is partially frozen.Heat olive oil in a large skillet and brown the meat. Be sure to cook it through. This takes about 10 minutes. Stir occasionally so that all gets evenly cooked. Meanwhile chop the vegetables. When the sausage is browned remove from the pan and drain most of the fat. Saute the onion and the garlic in this pan with a bit of the fat. When fragrant and caramelizing add the mushrooms, tomatoes, and beans. 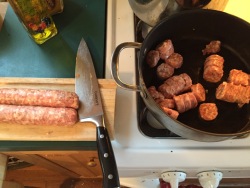 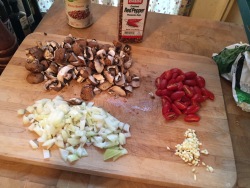 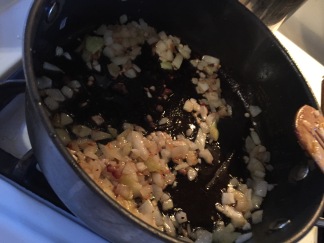 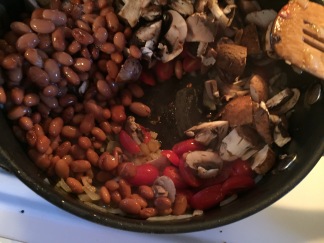 Stir the mixture and cook for about 5 minutes, then add the broth, the spinach, and the sausages to the pan and simmer while waiting for the pasta to finish cooking. This should cook for another 10 minutes. 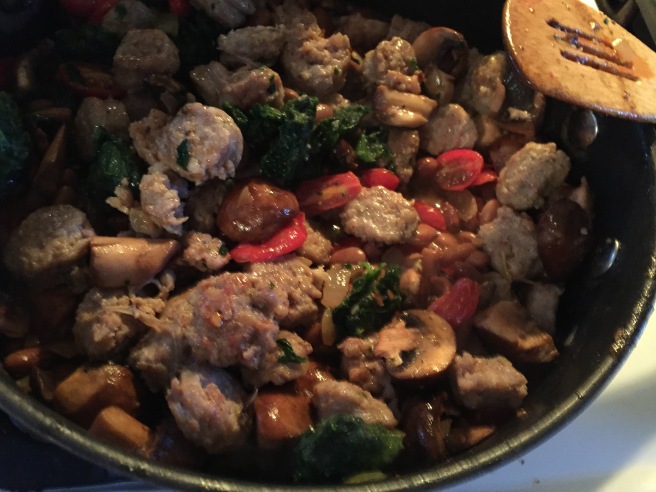 Blend in the drained pasta, add a shake or two of red pepper flakes, sprinkle on the Romano, and dinner is served: 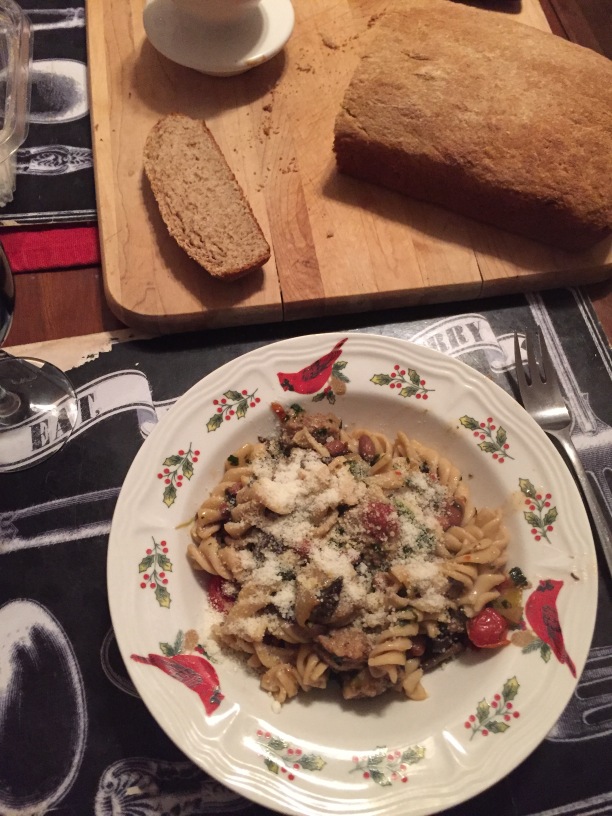 This was a big hit with hubby and son who were home for dinner. Which means I will make this again. This serves six. Son had two helpings. I put the remaining two servings in a freezer container for an “emergency meal” for the future.

Thoughts for changes that would be nice: use more spinach (or other greens of choice), use canellini beans (or less than a full can of pinto/brown beans), artichokes could be added, and an addition of black olives would be spectacular!