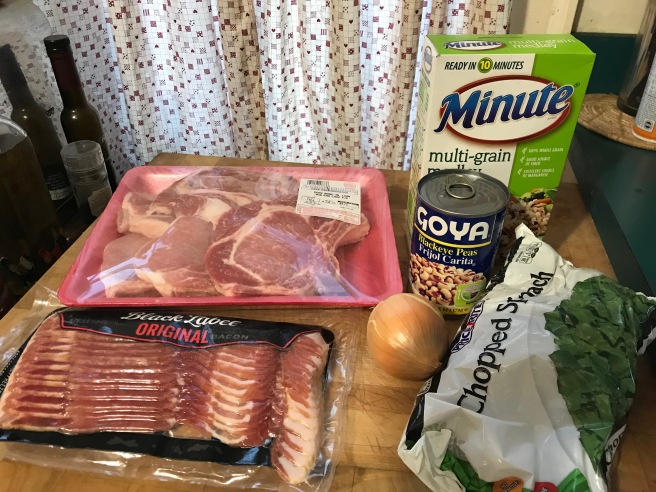 It’s New Year’s Day and these are the ingredients for dinner. My Mom used to make something like this saying it would bring good luck in the New Year. The three basic ingredients are pork, rice, and black-eyed peas. Mom would soak dried peas overnight but I chose canned. The two ladies in the grocery store trying to find them also wanted to use canned although one said her mother also used to soak the dried. The three of us had a time finding these cans as they were buried in a stack of boxes and not readily available on the shelf. They are using a ham bone; I am using pork chops. Some traditions add greens, such as Collard, but I like spinach. I make this differently each time so here’s how I made it this year.

For the Hoppin’ John, I cooked the bits of bacon and the onion in a cast iron skillet until the bacon was cooked. Sprinkle the red pepper flakes into this. I then added the spinach and continued cooking the concoction for about five minutes before adding the black-eyed peas and the prepared rice mix. Stir that all together and let heat thoroughly. The liquid from the can of black-eyed peas will reduce somewhat. 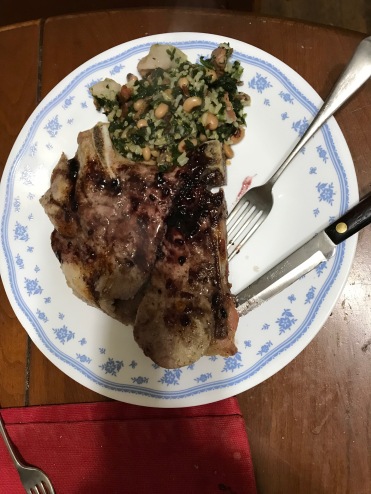 My original plan was to “stuff” each pork chop with the Hoppin’ John mixture. But Hubby wanted to glaze them with the blackberry preserves and he looked so endearing and delighted when he talked of it. So, in the spirit of compromise, I gave him the task of cooking the pork chops. He broiled them in the oven, flipped them over and put about a teaspoon of blackberry preserves on each and left them in the oven to glaze. This whole process took about ten minutes.

The Hoppin’ John was the side dish as well as leftovers for lunches for the week. Yum!