Somehow over the past 10 or so years our Thanksgiving meal became the pre-Thanksgiving feast for family to gather around. This is the result of blending families and the kids growing up and becoming adults. And when the son-in-law entered the family his birthday needed to be celebrated and then the grandchild was born all around the Thanksgiving holiday. So we don’t cook a turkey until Christmas because everyone will go to families with turkey feasts the next day.

So it is steak and cake…and pumpkin pie!

This year we bought a top butt uncut for $4.59 a pound. Hubby cuts it into the steaks for the Family Feast with plenty of meat to spare. This was a family time so I forgot to take a picture of the cooked steaks. And there were no leftovers! 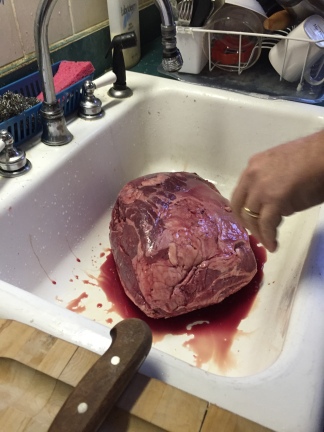 The cake will be a rainbow sprinkle cake made from scratch. I do not yet have a “go to” plain cake recipe. The first year I bought the cake mix and pre-made frosting. My step daughters and hubby came home and caught me making a cake from a box!!! Horror of horrors! They thought they were in the wrong kitchen or possibly aliens had taken over my body! I did this for a couple of years so they got used to it and son-in-law got the birthday cake he requested. So this year it is made from scratch. I found a nice yellow cake recipe that I had made for our Easter meal this past spring. I figure I can just add rainbow sprinkles. Homemade cakes tend to be denser than cake-mix cakes, at least the way I make them. This particular cake is dense and moist. I am pleased that it came out so well because I had my granddaughter helping measure and add the ingredients. She is almost two so the exact amount of baking soda and salt are questionable.

What to do to frost the cake? The son-in-law announced that he too is lactose intolerant or sensitive. So no cream cheese or dairy, except butter, will be required. I do not like to make marshmallow frosting because I do not do it well. So I get out a standard Buttercream frosting recipe from my 1950 Rumford Cookbook. This is a book that my grandmother used. There are notations in her handwriting and a draft of Grandpa King’s obituary on lined writing paper as well. I substitute soymilk in the ingredient list.

Buttercream is very sweet but seems to mellow some after being placed on the cake and left to sit for a few hours. Decorations are courtesy of the granddaughter.

And there is pie! A few years ago my son and I made two pies to determine if the Cook’s Illustrated magazine “improved” pumpkin pie was truly an improved pie. The crusts were store bought refrigerated crusts that you unroll. We used the Pillsbury brand crust for the “improved” pie and the store brand one for the other. The standard pie recipe that I had used was from my Betty Crockers’ Cookbook (1978). This is a basic cookbook found in ordinary kitchens all over America, nothing fancy or special about it. For Cook’s we ground fresh spices and it has sour cream added. It came out looking smoother and the aroma was better than Betty’s .

We had blind taste testing after the meal. Betty Crocker won hands down for best tasting! The lesson here is that those basic standard recipes can often be the best. I suppose that is why they become the standards and the basics.

I had posted the Steak and Cake feast menu and recipes in sleeve protectors and hung it on the kitchen cabinet. I figured folks could take a look and help out with things. 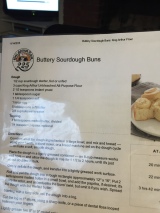 Son cooked the Brussels sprouts. These were wonderful! And to think the recipe came from the local grocery store coupon flyer. Basically skillet roast the sprouts with bacon, onion, garlic, and whole cranberries.

I made the sour dough rolls and these were nice and light and buttery.Thank you KAF!

Daughter made the green salad. Stepdaughters worked on the mashed potatoes and the baked sweet potatoes. And the sauteed mushrooms.

Hubby and son-in-law supervised the grilling of the steaks.

All in all it was hectic and fun and crowded and I would not have it any other way.

One thought on “Steak and Cake”