More jam or too much? That is the question.

I was looking for something to bake using homemade jam a neighbor gave me. He didn’t make it but someone at his work. I recently learned he is a chef at a local bar/restaurant. Not going to tell him about my food blog. Too much pressure!

These are from a Quaker Oats recipe booklet from 1982. Wow! That is older than my oldest child! Anyway I’ve used this for the banana crunch cake recipe and wanted to try some of the others. Over the years I probably have made a few but I just don’t remember. I came across these Wholegrain Jam Squares. They are whole grain because of the two cups of oats not because of anything whole wheat. In the 80’s oat bran, etc. was the key to lowering cholesterol. I also remember oat flour (made by grinding up oatmeal in the blender) was the secret ingredient in Mrs. Field’s cookies. Or so a letter circulated at the the time “revealed”. It would be a chain letter similar to and just as annoying as those Facebook posts telling you to “share if you agree”. (I admit I have succumbed if I was feeling particularly impassioned about something at the time. But mostly I roll my eyes and wonder if the poster will think I’m a heartless b—-!”)

Alright, enough about me, let’s get to the recipe. It is basically an oatmeal shortbread with jam and a streusel. Heat oven to 400 degrees F. Grease or spray a 9 x 13 inch baking pan.

I left out the 1/2 cup chopped nuts. Add them if you would like. Mix everything together except the preserves. It helps if the butter is at room temperature. I use my kitchen aid mixer and it’s mixed in no time! Reserve two cups and then press the rest into the pan. Flatten with back of spoon. Now for the jelly! For the first batch I used a 4 ounce jar of homemade blueberry jam. It barely covered half the pan! So I spread a mixed berry preserves from my fridge (store bought) on the other half. Crumble the reserved mixture on top. This covers the jelly pretty evenly and thoroughly. Bake for 25-30 minutes. Cool. Cut in squares. Eat. Might be nice served with ice cream. We just ate them and not all at once. I think they lasted 5 days or more! These were tasty but the fruit was barely noticeable. They looked marvelous! 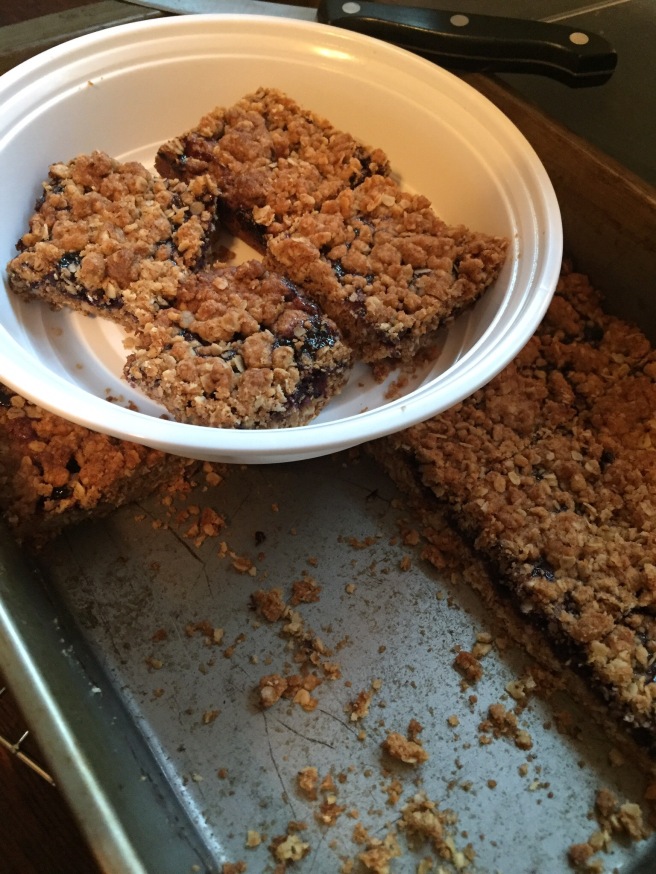 I tried again. I figured twice the amount of jam and raspberry would be a stronger flavor. I used an entire ten ounce jar of raspberry jam. Whoa! I also inadvertently baked these at 350 F instead of 400. They looked a little under done and I cut them while warm. Tasty but gooey. Did I use too much jam? 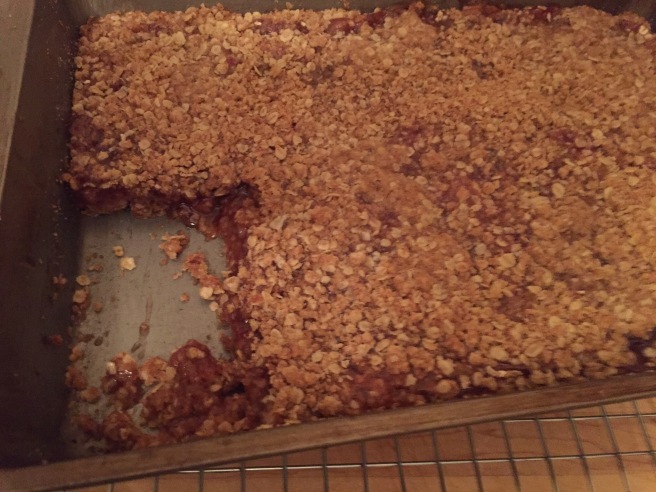 The next day they firmed up nicely. The flavor of the fruit was definitely present. These just may become my “go to” recipe for coffee hour, bake sale, work pot luck, and “bring a dessert ” dinner invitations.

For store bought jams and jellies be sure to read the ingredients before buying. Fruit should be the first ingredient listed. The only other necessary ingredients are pectin and sugar, preferably cane sugar or honey. Three ingredients is all that is needed in the real stuff. Beware of high fructose corn syrup. It’s what’s making America fat!