Why, might you ask, and what? I had bought one of those supermarket packages of green grapes and found the the quality was not very good for eating fresh. But what should I do with all those grapes? I could throw them all in the compost bucket but that seems like a waste. I found this recipe on the internet and adapted her adaptation for my own pie: Green Grape Pie

I had two refrigerated ready pie crusts in my refrigerator. Sometimes I buy these instead of making my own. I did not have elderberry flower syrup but the rest of the ingredients were all ready. I gathered them all together and baked a pie.

I think there were about 3 pounds of green grapes. I pulled them off the stems. I did not weigh them. It looked like enough for a pie.
1 cup white sugar, plus extra for top crust
1/2 teaspoon freshly ground nutmeg; I had Hubby grate the nutmeg while he was waiting for his Kindle to charge.
1 lemon, juiced; I had just sliced a bit off of a lemon for my tea, so I juiced the rest of it.
1/4 cup elderberry flower syrup; substituted light corn syrup with real Vanilla!
1/4 cup dark honey; my honey was not particularly dark. Actually I combined the corn syrup with the honey to equal 1/4 cup as 1/2 cup sounded like it would be too sweet.
1/4 teaspoon salt; who measures this? It’s a generous pinch.
3 tablespoons cornstarch
2 tablespoons unsalted butter, cut into small pieces

Preheat oven to 425 F. put one pie crust in the pan and put in freezer while making the filling. This is because you will put boiling hot grapes in the crust and you want the crust not to melt.

Put grapes, sugar, nutmeg, lemon juice, and honey/syrup in a large saucepan and heat. This will eventually need to be brought to boil. Before that boils stir in the cornstarch and salt. Stir frequently until it is boiling and thickens.

With slotted spoon remove grapes and place them in the frozen pie crust. Then add a bit of the syrup to fill the pie. I did not. In fact, there seemed to be enough syrup attached to the grapes already. The recipe has said it was a very juicy pie anyway. Dot the grapes with the butter. Place the top crust and pinch the edges together. I used my pie bird so did not need to cut additional slits. Sprinkle the top generously with sugar. Bake for 30 minutes until crust is golden brown. 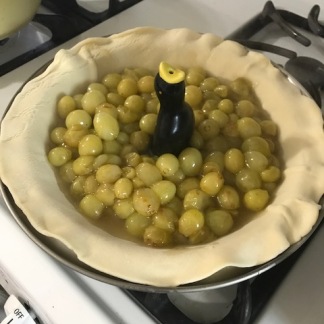 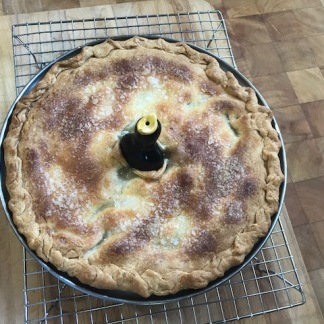 Looking good! It is supposed to cool completely before serving. This should let the juices set up a bit.

And then we ate a slice. I’m sorry to say that it is “nothing to write home about”. Hubby declared the crust wonderful but the pie “bland”. It was an interesting texture, mushy-like. The flavor probably did need that elderberry flower syrup.

I took the remaining pie to work to see what my coworkers thought. It was declared “interesting” but was not a hit. It was just not appealing. I will not be making this again. Next time I have a bunch of green grapes that are not the best, I will cook them down into a sauce for chicken or pork. I have to admit the sauce idea was Hubby’s first suggestion.

2 thoughts on “I made a Green Grape Pie!”