I have mentioned reading the Dessert for Two cookbook by Christina Lane. I have now made her molten chocolate cakes. http://www.dessertfortwo.com/2015/01/molten-chocolate-cakes-video/

I first had this type of dessert when my son graduated College and we splurged on a dinner at a fancy and expensive steak restaurant in the capitol. We had to valet park the car!  I wanted to learn how to make this but never got around to it. I did find a recipe in one of the “light-hearted murder mystery” books that I read from time to time. But I never got around to it then either. After making this dessert and thinking about it, it is similar to the chocolate pudding cake my mother used to make where the cake bakes on top and forms a pudding underneath. however this chocolate lava cake is so much more elegant.

I had to make this recipe twice. The size is perfect for luscious chocolate without so much cake leftover that tempts one to continue to eat. The first batch I made, and I use the word batch loosely, did not have any molten to it. 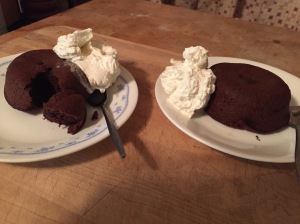 They were very chocolaty and tasty. We whipped some cream to serve with them. I was trying to figure out what happened that there was no “chocolate lava” oozing from them. They did not look over-baked from the outside. I either left them in the oven too long, left them in the ramekin too long before turning them out on the plate, OR it was the chocolate that I used. I generally have Hershey’s Special Dark chips and not semi-sweet chocolate chips on hand and this is what I used. Could this make a significant difference?

I waited a day or two and tried again. I figured this time I would shorten the baking time by 3 minutes. Perhaps my oven runs hot. The tops of the cakes did not look quite done; they had a bit of an indentation. But I took them out of the oven 3 minutes sooner than her instructions. I left them in the ramekin for 3 minutes and then turned them out on the plate. And you see the results!

So yum, yum, yum! And if I knew how to put a smiley face in this blog I would put it here.