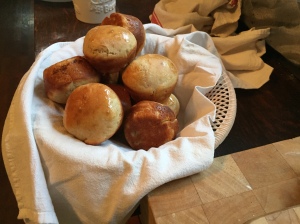 These are not biscuits. These are no knead dinner rolls from a Betty Crocker website. Very easy, very quick, and very good hot out of the oven. Do not put these in the microwave the next day as they will become hard as rocks. I did not get to eat a leftover roll with my salad at lunch the next day. Oops!

I have not been very successful at making biscuits. They usually end up like hockey pucks. Maybe when first out of the oven and very hot with melted butter they taste okay. I avoid this whole fiasco by baking muffins and popovers instead.

But my quest is to make biscuits that are enjoyable, light and fluffy, and do not have the chemical taste of canned biscuits. I made one of the recipes from KAF 200th anniversary cookbook, page 69, Bert’s Buttermilk Biscuits using the food processor method. They were good. They had a crisp outside. And they were fine the next morning as well. But they were small and were not fluffy. 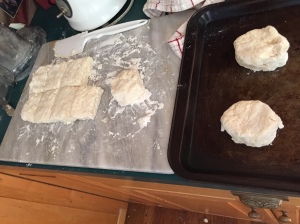 Getting them ready for the oven and

right out of the oven. 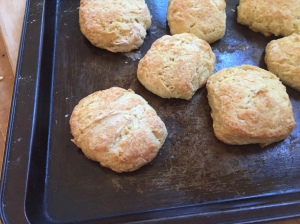 Now for Grandma’s biscuits. My brother asked me not to share the recipe so I won’t. Let us just say it has a heck of a lot of lard in it. I cannot bring myself to use that amount of lard. No, no way! I am looking up biscuit recipes on the internet and in my many cookbooks and there is nothing that comes close to the amount of lard Grandma used, if my brother’s recollection is accurate. What to do?

After a more extensive search I find one, just one, recipe that calls for ½ cup lard AND ½ cup butter. So that is close enough so here goes…but I am still not sure. And those were baked at 500 degrees! Most recipes call for a 400 or 425 degree oven (Fahrenheit).

The other issue is that the “best” recipes are using self-rising flour. Grandma did not use self-rising flour. I don’t have self-rising flour. I do know how to make it myself though. Plenty of instructions on the internet. Here’s one: http://www.kingarthurflour.com/tips/homemade-self-rising-flour.html. What to do? Also the best biscuits are made with a sticky dough. I do end up adding a scant ¼ cup more of buttermilk. I bake these in a cast iron skillet. I am careful not to over handle the dough. 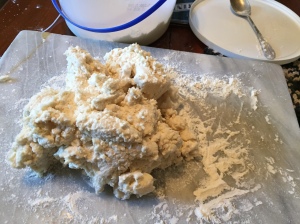 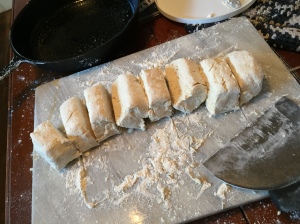 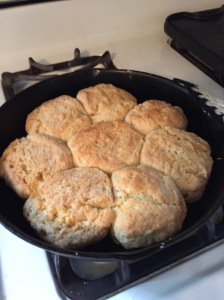 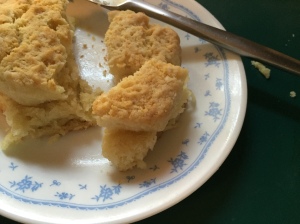 bigger than the others.

Crumbly, I may have under baked them so I leave them in the oven a few minutes longer. I miss the butter flavor. I am not sure if I would describe them as light. Maybe next time, using half butter. And half the amount of fat! Hubby likes them but would like them to be less crumbly but likes the crustiness. Could be lighter on the inside. Will be great with jelly. He tasted the butter which was brushed on top. I was disappointed in the rise. I think they taste like Grandma, fat and floury!

These are big enough to toast on the griddle the next morning. Be sure to add butter and jam. They still are missing the buttery flavor. The fat and flour fill the mouth.

The verdict: we are not biscuit people. I should go back to muffins, rolls, and popovers. However there are more biscuit options to try. Perhaps sour dough biscuits will be next. My mother cut out recipes from the newspaper many years ago that featured a variety of breads to make with sour dough starter. These are yellowing in one of my notebooks but still legible. A friend from church recently gave me a portion of his starter that he made from scratch (without yeast) two years ago.  There’s also the possibility of getting some self-rising flour. I’ll have to see what strikes my fancy next!

2 thoughts on “The Elusive Biscuit”